Members will be saddened to learn that Alfred Oppenheimer passed away on July 17th, just 3 months before his 90th birthday. 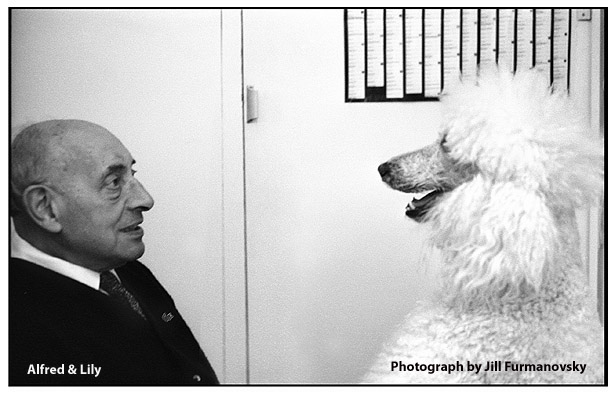 Alfred was born in 1922 in Germany and it was apparent to his family that at that time Germany was not the safest place to live and bring up children, particularly if you happened to be Jewish. Accordingly, the family made plans to escape to England in which they succeeded, arriving safely in 1935. As German citizens, Alfred and his father were interned on the Isle of Man as 'enemy aliens' in 1940 for about 18 months. Alfred made the most of this time, seizing the opportunity to further his study of English. His mother had not allowed him to study English when they lived in Germany, lest he spoke with a German accent! Alfred was a medical orderly at the internment camp and made lifelong friends amongst the other young men with whom he was interred. He later became a socialist, partly because he felt that they were the only party who spoke out against the internment of German Jewish refugees. After his release, Alfred took classes in engineering and at night, when not attending evening classes he manned anti-aircraft guns and did research in a bomber plant, eventually qualifying as an engineer.

After the war Alfred married his first wife Rhoda in 1951 and they had four sons, the first pair being twins. Having been deprived of many opportunities during his own youth, Alfred made sure that his family did not suffer in the same way. During his long career he held a number of senior positions in industry and was involved in many and varied projects including the design of the Colston Dishwasher. For many years he worked for the Hoover Company in that wonderful Art Deco building on the A4. He was invited to contribute to the Concorde aircraft design team but declined as he thought it a waste of public money and would become merely a plaything of the rich. He was a man of strong principles, and often outspoken which sometimes adversely affected his prospects. He was an active participant in Scientists against Nuclear Arms and sought to raise public awareness of the dangers of Global Warming. Throughout his long life he continued to study obtaining an Open University Degree in engineering and just 4 years ago he began to outline a PhD thesis on the subject of climate change. Alfred also researched the roots of anti-semitism and was an outspoken opponent of all forms of bigotry and racism.

Sadly in 1994, Rhoda, Alfred's wife for over 40 years, passed away. Some time later he met and subsequently married Jacquey with whom he spent the remaining 17 years of his life. They had many interests in common including world travel, science and astronomy. Jacquey introduced him to the Hampstead Scientific Society and Alfred would accompany her to meetings and to the Hampstead Observatory when she was on duty as an assistant demonstrator.

Alfred had a long, productive and interesting life and was possessed of an inquiring mind that was never still. He was very fortunate to have shared his life with two loving and caring partners both of whom also shared his many and varied interests. He leaves behind his 4 sons and their families with whom we share their sorrow at his passing, but at the same time we join them to celebrate a long life, lived to the full. – Shalom Alfred.