Best wishes for a Merry Christmas and a Happy New Year from Council!

We are sorry that due to health and family reasons Jonquil Florentin has resigned as a member of Council. We thank her for her valuable contributions the last year, and long-standing support at the observatory.

News from the Observatory

We were very kindly donated a 400mm Dobsonian telescope from Dougy Burgess and it’s proving to be a hit, allowing us to see many much fainter objects than the Cooke. The new paved area has provided the perfect home for it. As the Cooke is best for the Moon, Planets and Double/Multiple Stars and not much else, the Dobsonian has increased our ability to show more when entertaining our visitors. Now if only the weather would cooperate, we have only been open on a handful of occasions since we reopened in September!

A note for your diary: Terry Pearce and Yours Truly will be in January’s Sky at Night program talking telescopes. In theory on BBC Four, Sunday 12th January at 10pm. 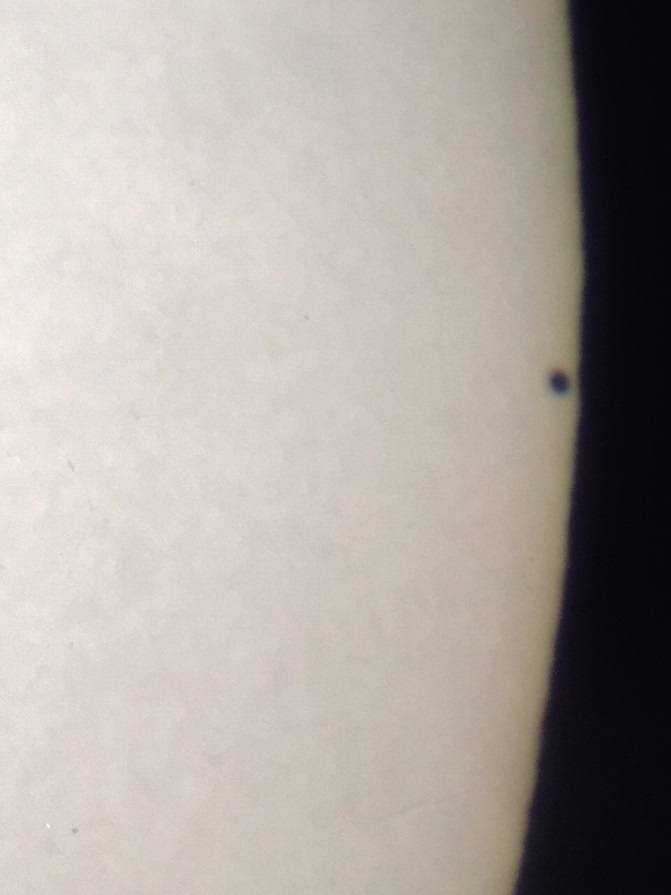 We opened the Observatory for the Transit of Mercury although the weather forecast did not look promising with broken cloud for the start of it but predicted to thicken throughout. This prediction was spot on but we were very lucky to have many openings in the cloud, to allow us some extended glimpses of the tiny, black spot, that is Mercury, as it lazily made its way across the face of the Sun.

Bearing in mind Mercury is only a quarter again in size larger than our own Moon and that it is 90 million km from Earth during the Transit, it is no surprise how small it appears. To see it as a defined disc you need to see it at about 50x magnification but in order to see it properly it is better to see it at magnifications of over 100x.

For the transit we swapped between 175x and 215x which was allowable with the ‘seeing’ or steadiness of our atmosphere on the day. Having calculated where on the Sun’s disc Mercury would first appear and operating at 175x magnification, we stood poised to see the first contact at 12:35 & bang on queue, the first tiny nibble appeared on the edge of the Sun’s Eastern limb. Then the cloud thickened, as if it had a naughty sense of humour, to hide the remainder of the ingress. When the cloud next cleared we saw Mercury fully on the Sun’s disc.

Usually there are other features visible on the Sun during transits but with the Sun at minimum in its 11 year cycle, there was little to see. No Sunspots or faculae were evident and we could only see the ‘Granulation’ of the convection cells, that draw up hot gases from the lower Radiative Zone, to then cool, spread out and then descend back down. These pepper the entire surface, however with reasonable seeing (unusual with scudding clouds!) we could see the normally elusive granulation, albeit in blurred apparition.

We had an estimated 50 visitors, many coming and going as their busy lives dictated and all but one managed to see some of the Transit. It was due to play out from 12:35 until 18:04 but with the Sun setting at 16:22, from the UK, we missed a big chunk. This was made worse by the trees at the South East of the Observatory and as predicted, we lost the Sun to them shortly after 15:00 although the forshortening effect in the thicker cloud cover was in play by then anyway. If you want to join us next time you’ll have to wait until November 2032!

SWIFT-TUTTLE - OUR REAL SWORD OF DAMOCLES ?

During August each year, the night sky treats us to a display of celestial fireworks in the form of the Perseid meteors, so called because the radiant of this shower lies in the constellation of Perseus. The meteors are small particles of dust and grains which have been left in orbit around the Sun by the parent comet Swift-Tuttle. Each year, on about the 11th of August, the Earth intersects this stream of comet debris. Particles are drawn into the Earth’s atmosphere where they are heated up by friction, become incandescent and result in a display of âshooting starsâ. While we admire this annual display we should be aware that the parent comet – Swift-Tuttle, is possibly the greatest threat to the continued existence of life on this planet! It is a threat that will remain with us for the next 10,000 - 20,000 years!

When it was first discovered in 1862, Swift-Tuttle must have been a wonderful sight with a tail extending some 30 degrees. At that time the comet came to within 50 million miles of the Earth. During that apparition, the comet was observed to deviate from its calculated orbit by about 10 secs. of arc. The deviation was caused by jets of gas emitted by the comet, acting like rocket thrusters altering its course. Because of this deviation, it was difficult to predict an accurate orbit and date for its return. The comet’s orbit is also perturbed by the gravitational field of Jupiter. For every one orbit of the comet, Jupiter makes 11 orbits of the Sun and computations of the comet’s orbit have to take the perturbations due to Jupiter’s powerful gravitational field into account.

All these effects contrive to make the position of Swift-Tuttle very difficult to predict accurately. Using the orbital elements obtained in 1862, the comet was expected to return in 1981-2, but in the event, it was not recovered until 1992! Using data obtained during this last apparition, Swift-Tuttle is predicted to cross the Earth’s orbit again on August 5th 2126. At this date it is calculated that it will miss the Earth by as little as 23 million kilometres or by 14 days, give or take a day or two! However, the last prediction was out by 10 years! In 1993 further material ejection was observed which could further change the predicted orbit. The comet was lost to view in 1998, when it became too distant and faint to observe.

Swift-Tuttle is truly our Sword of Damocles. It is a real threat to life on Earth. With an estimated size in excess of 20 kilometres, it is far bigger than the comet or asteroid thought by some scientists to have been responsible for, or at least contributed to, the extinction of the dinosaurs 65 million years ago. The discovery, by geologists, of enhanced levels of Iridium at the boundary of the cretaceous & tertiary sediments laid down at that time, and the subsequent discovery of the trace of a huge ancient impact crater in the Yucatan Peninsula, yield compelling evidence to support the theory that the Earth suffered a major impact in the geological past which coincided with a major extinction event. Not only the dinosaurs, but as much as two thirds of all living species on Earth became extinct at that time.

When Swift-Tuttle crosses Earth’s orbit in 2126 it will be travelling at over 60 kilometres a second and if it were to collide with Earth it is estimated that the energy released by the impact would be equivalent to an explosion of about 5 billion megatons of TNT. The object believed to have struck the Earth 65 million years ago, was equivalent to just about 100 million megatons! Such a destructive impact could strip away the Earth’s atmosphere completely and annihilate virtually all life, except perhaps for some hardy species of bacteria buried deep in solid rock. Our message to the next generation must be: KEEP WATCHING THE SKIES – that’s where the real danger lies.

Late one afternoon some years ago, I was walking East and saw against a very dark cloud a brilliant rainbow ahead of me. It had a fainter secondary some way from the primary bow, with reversed colour order. But the primary rainbow itself seemed to have several bright repeats with the same colour order, abutting it and each other in series, beneath. I'd not seen or heard of such a thing before, but on enquiry, both Trevor Law and Philip Eden recognised it as the well-known phenomenon of supernumerary rainbows. It was in the days before everyone had cameras on their phones so the best I can do is point you at [1] for examples. What I saw is likely to have been because of small uniform raindrops in the cloud.

Supernumerary rainbows cannot be explained by purely geometric optics. Thomas Young, the man who had demonstrated the wave nature of light, attempted an explanation based on interference. Consider parallel rays of light from the sun hitting a spherical raindrop. They are refracted where they hit, reflected from the back of the drop, and refracted on emergence (ignoring rays that pass through or are reflected more than once). Incident angles will vary depending on how far the ray is from the raindrop's axis as shown in the diagram. The graph below gives the scatter angle for different incident angles. For each scatter angle there are two incident angles, or paths through the drop, with the paths getting closer as the scatter angle gets closer to the primary rainbow angle, close to 138°, where the paths co-incide, giving the bright rainbow. (The primary angle varies with wavelength, of course, giving the colour spread of the rainbow.) In general the paths have different lengths and so can interfere. Young therefore suggested that there would be brightening where the path difference was a whole number of wavelengths, to give the supernumeraries.

The astronomer Airy criticised Young for being too simplistic. The diagram below shows lights as rays but Airy considered the plane wave front incident on the raindrop, and how it is distorted by refraction, and further affected by interference at reflection. He performed the more complex integration of intensities over curves for different angles and derived a pattern of bright scatter angles which was closer to the actual phenomenon. More sophisticated models are now possible using computing power to take account of diffraction, polarisation, the size of the sun and non-spherical raindrops.

Recently, Laven [2] has looked again at Young's method, and says that his problem was not taking account of phase changes within the raindrop, and in particular phase changes of 90° when rays cross a focal line. When a plane wave is distorted by hitting a raindrop, each little section has its own centre of curvature, which is a focal point. All of these together are a focal line. I am not sure who realised there would be a phase change â Laven quotes van de Hulst [3]. When Laven used these results with Young's method, despite its simplicity he found it gave a very good approximation of the supernumerary angles pattern. He compares the modified Young's method results with Airy's in [2].

Since that experience near Queen's Park, I always look out for supernumeraries when an ordinary rainbow is about. I may have just seen a faint example since but will keep trying.