The annual General meeting took place on June 20th preceded by the traditional wine and cheese party. Our thanks to all those members who contributed food and drink to the feast.

At the Council meeting on April 4th Simon Lang was re-elected as President. The Secretary reported that she had received no new nominations for Council from the membership, and that this year David Markham was resigning. The following were elected to Council:

We thank David Markham for his help on Council and welcome Martin Williams back on the team.

At the AGM, Trevor Law announced that he was retiring as Meteorological Section secretary as he felt that the task was beyond him. Council thanked him for his efforts at researching new equipment, and we have included his report of the year's weather below. We have now received a donation of a weather station from Adrian Larkman and members who are interested in the weather are invited to contact the General Secretary.

We are all looking forward to the Observatory re-opening for regular sessions in September. Simon gives an update below and keep an eye on the Facebook page https://www.facebook.com/pages/Hampstead-Observatory/194954637264652.

Together with this Newsletter, you will find a programme card for the next session of lecture meetings. More cards can be obtained at meetings. Do take some if you can place them in suitable locations such as Libraries and/or Schools.

The first lecture of the session will take place on Thursday September 19th at 8:15 pm. at which Johnathan Napier of Rothamsted Research will talk on:

I hope to see you at the meeting.

Immediately after the AGM of 2018 (on the day of the Solstice), an Anticyclonic North Easterly type developed, bringing us warm, dry and fairly sunny weather up to the 13th July. On the 14th, winds turned South Westerly, initially bringing cooler weather but it soon warmed up again towards the hottest day of the year, 26th July, when it reached 35°C - before a thundery breakdown and cooler weather. Again, it soon warmed up again for the first week of August – but thereafter conditions reverted to nearer normal, with average to cool temperatures and gradually more rain, culminating on the 26th August with a thoroughly wet day and temperatures of just 13°C, nearly 10C° below normal.

June and July were remarkably dry. Parts of South East England got less than 10% of normal rainfall in June. August had nearer to average rainfall. Summer 2018 will be remembered as a warm, glorious summer but what was notable were a lot of very warm days – but almost no really hot ones. 26th July has already been noted and was the only day when temperatures widely exceeded 32°C - 90°F in old money and the lower boundary for 'Phew, what a Scorcher!'. Honourable mention must go to 6th August, which missed 32°C by a whisker.

September started, as is quite common, with a dry period – warm days but some chilly nights. Mid-month a brief warm spell with very mild nights led into an unsettled and windy spell from the 18th-23rd. After this we had a predominantly cool spell and, as the Equinox had passed, decidedly chilly nights.

October bought us quiet and less cool weather – though the night of 3rd-4th gave us the first of the autumnal fogs. Very mild weather came from the 10th-13th, with the overnight min on the 12th-13th an astonishing – if windy – 19°C! The rest of the month was unremarkable but cooler weather towards the end bought us the first frost of the autumn overnight 28th-29th.

In November, the first couple of weeks were fairly mild – if not dry – but the period from the 19th-27th was chilly with some sharp overnight frosts.

Milder weather came right at the end of the month, leading into a sometimes very mild first week of December before it turned cooler. A very wet weekend on the 15th-16th led us into a milder but unsettled spell. However, quiet and fairly mild weather predominated over Christmas and the New Year.

January this year bought quite benign weather for the time of year – but it gradually turned cooler after mid-month, eventually leading to a cold snap that bought us the winter's only snow and most severe frost on the night of 30-31st, below -5°C.

February gave us a wet and windy spell from the 7th-9th but the most remarkable weather event was a mild and predominantly sunny spell from the 19th to the end of the month, culminating in an astonishing and record breaking 20°C on the 25th and 26th. The nights were cool, even cold during this period, as the air was dry.

March started with unsettled and windy weather but it settled down after the 18th. The month ended with dry, sunny weather – classical "March, black ram, come in like a lion, goes out like a lamb".

Early April was largely unremarkable, but nights from the 7th to the 9th bought mist with some fog patches. The period from 17th to the 23rd, over the Easter weekend bought gloriously warm and sunny weather, temperatures reaching 24°C on the 21st (Easter Sunday) and the 22nd. The following Saturday bought strong and gusty winds, with us on the edge of Storm Hannah.

Early May was cool, unsettled and showery. A milder spell came from the 15th to the 25th but this was otherwise an unremarkable month.

Then June so far, what a shocker and what a contrast to last year! The first two days though were very warm and sunny, temperatures reaching 27°C on the 1st but since the 4th it has been cool, unsettled and very wet – though luckily in our area we've missed the worst of it. Unusually strong winds for the time of year on the 8th.

Indications are for a sudden contrast starting over the week-end, as a plume of very warm air developing over the continent clips us. There is a danger of it becoming humid and thundery.

Finally, a word about Noctilucent Clouds. These form in the summer months at the Mesopause, at the top of the Stratosphere, about 50 miles or 80km altitude and are illuminated by the Sun when we at ground level are in relative darkness. A chap in WOLAS, and others saw a display on 9th June, unusually early for this far South – and I saw a modest display on the morning of the 16th. They seem to be anti-correlated to the sunspot cycle. In 2008, 09 and 10 there were widespread, vivid displays. We are once again entering solar minimum and spaceweather.com reckon this could be a bumper year for them. It is claimed they have already been seen as far south as Los Angeles, at 34°N, smashing the all-time record. It may be worth keeping an eye open for them from an hour after sunset to an hour before sunrise till early August.

The works at the Observatory are now in their final phase, and we are now tackling the new paved viewing area, dry rot in the annexe, final fixing of the steps' lighting and finishing off various other things. We have the good fortune of employing Peter Gould who is an expert carpenter and problem solver, to help us see out the remainder of the works especially as he's assisting us at cost. He helped us repair the Dome building back in 2010, replacing all the footings, some timberwork on the Dome and the cladding of the annexe.

We had a tremendous one off reopening to celebrate Apollo 11's 50th Anniversary on Sunday the 21st July. For the opening:

Brian Travers, who was one of the telescope makers when we were still CATS, discovered a telescope in good condition, just binned at a local recycling centre, and after an email from me, he was allowed to take it. He fixed it up, donated a tripod and we then put it in a 'raffle for all those who donate £10 or more'. This raised £380 and the raffle was won by Kate Sellars. I made a point of contacting all the donors to thank them for their generosity.

It was a very successful day and I'd estimate we had about 200 visitors between Noon and 10pm with many children. The event was well covered in advance by two sizeable and enthusiastic articles in the Ham & High and Camden New Journal to help boost numbers.

We're particularly grateful to Will Scott, Nick Maslov, Brian Travers and James Levi for helping to get this set up and for helping on the day and to all the other members who came to do a stint of assisting.

We'll reopen for our normal weekend sessions towards the end of September. Over the closure period some demonstrators and assistants have moved on and we'd like to thank them for their sterling service! We'll have numerous new volunteers starting with us as replacements, many of whom have pitched in with the works already, and we thank them for waiting patiently for the chance to help out with the public.

Things will be looking up again (weather permitting of course).

OBSERVING THE MOON: (1) REGION OF PLINIUS 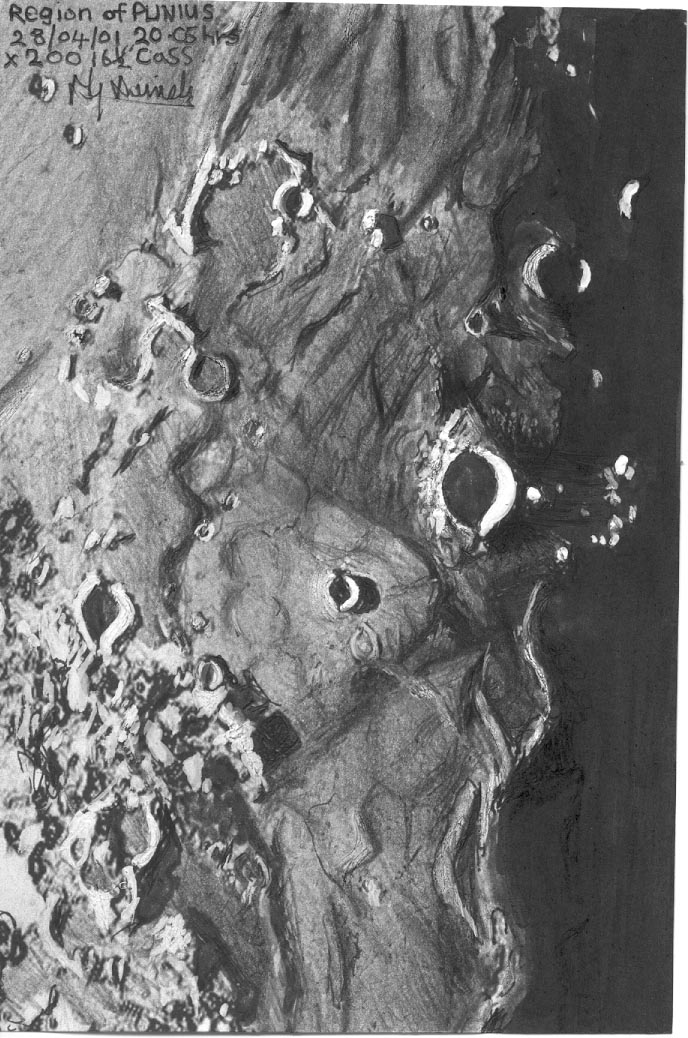 After an unsettled showery day, which included hailstones, the sky cleared just after sunset to reveal a five day old Moon. After a quick look at Theophillus etc, which was hard against the terminator, my attention was drawn northwards to the region of the crater Plinius and more particularly to the area surrounding it. Here, Lunar dawn was just breaking and the whole region, still in deep gloom, was criss crossed with numerous flow ridges no doubt formed by the extensive basalt flows which produced the Mare Serenitatis and Tranquillitatis. Plinius is situated close to the junction of these two Maria and the whole area must have been subjected to considerable tectonic upheaval by the violent processes which created them.

These flow ridges are only seen to their greatest advantage when close to the terminator, under higher illumination the whole area looks deceptively flat.

To the west of Plinius, the smaller crater Dawes, still filled with shadow, sits on a roughly triangular shaped raised platform. Westwards of Dawes, the ghost rings of an older burried crater chain can be discerned within this platform roughly midway between Dawes and Vitruvius.

To the north of Plinius a series of intertwined sinuous ridges begins which continue well into the Mare Serenitatis, while to the south, many concentric ridges follow the curved “shoreline” of the Mare Tranquillitatis, resembling frozen breakers lapping a petrified beach.